The Belt of Truth

The Belt of Truth

and out of place in our society.

After all, everybody lies - don't they?

This page contains a Bible devotion on truth.

It also encourages us to 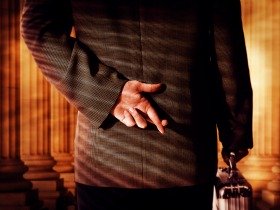 When I was young, my peers told me that crossing your fingers behind your back made any lie you told void of consequences.

Lying was rationalized, excused, and tolerated.

Yet, when I watched television,

I saw a world where

telling the truth was honored

and being a man of your word

Therefore, I was presented with both sides of the moral argument.

I rarely see both sides of the moral argument presented.

the Belt of Truth anymore?

Lying doesn't really have consequences.... does it?

I do not watch a lot of television.

Yet recently I have seen many commercials that

* There are few, if any, consequences to lying.

that Encourage Lying and/or Deception:

Mother wears her daughter's clothes and then lies about it. (She gets away with it and appears smug.)

Parents run out of sugary cereal and lie about the nutritious cereal they give their child. (They get away with it and appear smug.)

A parent lies about making a delicious treat from scratch that everyone loves. (This parent gets caught by the other parent. The consequences appear minimal and are downplayed.)

Father allows child to do something and then says, "Let's don't tell your mother." (We are not shown what happens next.)

showing people lying and getting away with it,

and then appearing happy about their choice.

What do you think about that?

If you are a Parent

what do you teach your children

I encourage you to begin to combat this barrage of media deception being presented in a positive way to your child.

One way to do this is to reward your child after he finds a certain number of deceptions - deceptions that are presenting lying in a positive way  by the media.

This will at least train your child to notice deceptions and regard them as bad models of behavior.

Another way to teach your child about honesty and truth is to play an entertaining song about truth.

Children need to be taught that.....

is not obsolete and

lying is not insignificant but actually a sin.

A few years ago, a friend of mine was struggling with lying.

I really started to think in depth about the issue of lying.

Don’t tell lies to each other;

it was your old life

with all its wickedness

that did that sort of thing;

now it is dead and gone.

It began to dawn on me that our society is full of lying.

I began to notice all kinds of examples
of lying and deception
in the media and in daily life.

(in order to get away with something or avoid consequences)

is a form of deception.

God calls us to tell the truth.
In fact, Jesus said one of his names is Truth.

Demonstrating the need for Truth

Now that God has dramatically begun to show me the vast problems with deception in our society, I have begun to teach on the subject of telling the truth.

During my presentations, I usually assign a person to be Jesus. Then I demonstrate that each time we tell a lie, we actually turn our back on truth - and that means we turn our back on Jesus.

When we put that visual picture in our mind, it will help to keep us alert so that we do not take advantage of any subtle invitations to lie.

You are loved.
You are valuable.

Take note that many times we lie about ourself.

The following are lies:

"Nobody really cares about me."

"I'll never amount to anything."

All of those are lies.

When we say or think those things, we are lying.

God loves you with an enormous, extravagant love.

I encourage you to put on the belt of truth
and
resist repeating the lies that the devil
and
demonic forces
want you
to believe.

Scripture for the Belt of Truth

God never meant for us to make lying insignificant.

He tells us to promote truth:

"Instead, we will lovingly follow the truth at all times - speaking truly, dealing truly, living truly -
and so become more and more
in every way like Christ
who is the Head of his body, the church."

And God tells us the truth about disobedience:

"A false witness will not go unpunished,

And he who tells lies will not escape."

Do my actions show that I promote honesty?

What positive difference would it make
if everyone wore the Belt of Truth?

"Do not lie to one another."

"The righteous hate what is false."

Am I teaching my child to tell the truth?

Am I modeling - telling the truth or making excuses for lying?

Back to the top of Belt of Truth